When my great-grandfather, Archibald Van Orden, enlisted the in the NY 12th Infantry of the US Army on January 27, 1862, General Daniel Butterfield was in overall command of that brigade. Just 30 years old, Butterfield was already renowned for three things. First, his career rocketed from Sergeant to General in just a few months, before he served on a battlefield (this earned him enemies). Second, he was fond of stylish military uniforms (this earned him critics). Third, he sported an awesome full mustache (this earned both admiration and jealousy.)

A vain man, General Butterfield wanted his Corps to stand out for its uniforms. So he advocated purchase of French Chasseur uniforms for the 12th volunteers. If war was decided by style alone, his choice may well have been victorious.

Unfortunately, Chasseur uniforms were made in too small a size to fit most Americans. However, Archie being only 16 at the time he received his Chasseur uniform, was able to wear it with pride, no doubt cutting a fine-looking figure. This shows how he may have imagined it would appear in gallant warfare. 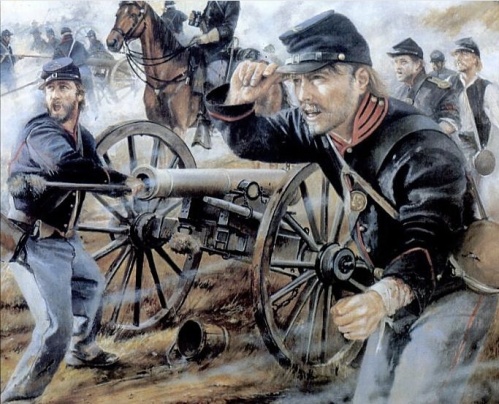 In actuality, few (if any) Chasseur uniforms were ever worn on the battlefield.

Butterfield himself, however, went on to gain fame as the composer of “Taps”, the bugle call played at the end of the day, and also at funerals.  But he gained notoriety when he became chief-of-staff serving General Hooker. It was said that General Hooker’s command post was a sordid mixture of bar-room and  brothel. From this place came a slang term for prostitutes who were known as “hookers.”

One response to “Chasseur, For Sure”