On Friday, April 12, 1861, Confederate batteries in Charleston, SC opened fire on Fort Sumter in Charleston Harbor, which had remained under Federal control. At 4:30 AM the first cannon fired. Bombardment continued for 34 hours. Though none on either side were killed, the shelling remained hellish to Union forces garrisoned in the masonry fort. They were outgunned and undersupplied. 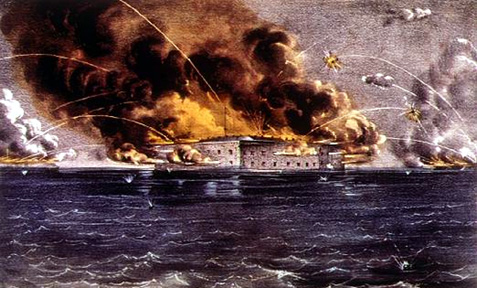 After Union supplies of materiel and food were exhausted, Major Robert Anderson had no choice except to surrender to the Confederates by April 14.  Proclamation by President Abraham Lincoln on April 15, 1861 subsequently called for raising 75,000 troops to defend Washington, D.C. against attack. For all intents and purposes, the Civil War had commenced after the unprovoked attack on Fort Sumter from rebel batteries commanded by General Beauregard.

Major Anderson was allowed to remove the flag from Fort Sumter. No doubt he and his troops held the final lyrics of the patriotic song written by Francis Scott Key in their hearts for the rest of the dreadful war:
“And the star-spangled banner in triumph shall wave
O’er the land of the free and the home of the brave!”

This entry was posted in Beginnings, Key Event, Key Place. Bookmark the permalink.